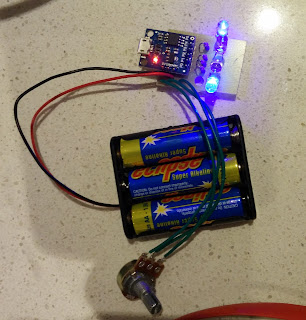 I have been working with ATTINY chips for some time. When I saw the low cost Digispark that has one on board, I had have 1.

I have developed this project that utilizes the ease of programming with 123D Circuits and the cost of digispark. It is very similar to the standalone ATTINY circuits posted several years ago but has been simplified, to make it easier to program and easier to manufacture. Check out the instructions bellow.

Chinese Digisparks
Real Digispark
Posted by Unknown at 2:10 AM

Follow @TRBurroughs Tweet
Welcome to The Project Inventory! This is a site where educators and DIYers can share projects and plans. If you like the site please let us know, and if you have a project or plans that you want to share send them over. We would love to see your detailed work.